Pre-made lentiviral expression particles (lentivirus) can be used for transient or stable gene expression in dividing and non-dividing cells without the use of transfection reagents. Some of GenTarget’s lentiviral particles are generated from its optional inducible lentivectors. 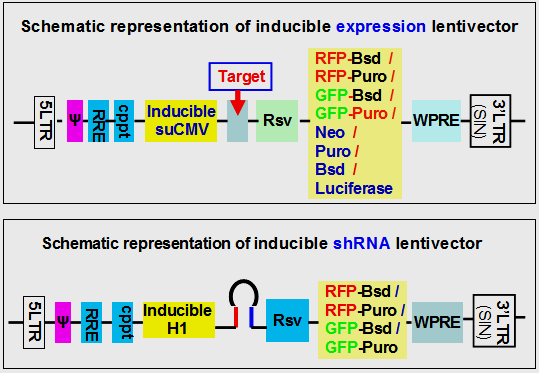 What is GenTarget’s optional inducible expression?

Constitutive expression or knockdown of certain genes may be toxic or unwanted; in such cases, controlled expression is required. GenTarget’s optional inducible lentiviral particles address this need by this need by allowing either constitutive or inducible gene expression in the same lentivirus.  Target or shRNA are expressed under a modified suCMV promoter or H1 promoter, respectively.  Both promoters contain two copies of the tetracycline operator sequence.  This modification does not silence the promoters’ constitutive expression; however, in the presence of a repressor protein (TetR), the promoters are repressed by the binding of TetR to the Tet operator (TetO) sequence. Once  tetracycline (Tet) or its derivative Doxycycline (Dox) is added, it binds the TetR protein, which is then released from the promoter, allowing expression / knockdown to proceed.

How to deliver the repressor regulator (TetR) for inducible expression?

The repressor protein (TetR) must be present in order to use the particles for Tet-inducible expression. The presence of tetR can be achieved by the following methods:

How much tetracycline (or Dox) is used for induction? How much induction can be expected?

Our inducible system has a low basal expression level and very high fold induction. Expression is induced in the presence of tetracycline or doxycycline in a dose-dependent manner. The amount of tetracycline required is dependent upon cell type, but a final concentration of 1.0 µg/ml is commonly use. Please note that many bovine sera used in culture are contaminated with tetracycline or its derivatives, which can affect basal expression. Depending upon the cell line and the repressor protein expression level, a 20-fold to 1000-fold increase in expression can normally be obtained after induction.

What’s the difference between our inducible system and the Tet-on / Tet-Off system? Are they compatible?

Our lentiviral inducible expression vector contains a strong constitutive promoter (H1 or CMV)  integrated with two copies of the tetracycline regulator binding sequence. The shRNA or the gene of interest (GOI) can be expressed at a high level without any induction or activation.  Optionally, expression can be first repressed in the presence of the repressor protein (TetR) which binds to the expression vector’s Tetracycline Response Element (TRE), and then induced by addition of tetracycline (which removes TetR from the TRE).