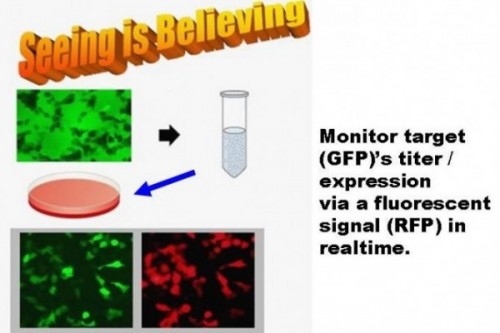 The SureTiterTM lentiviral system is a gene delivery tool using lentivectors for gene expression or knockdown. Lentivectors are HIV-1 (Human Immunodeficiency Virus 1) derived plasmids. They generate a replication-incompetent lentivirus that can then be transduced into virtually all kinds of mammalian cell types, including stem cells, primary cells, and non-dividing cells.

Why use The SureTiterTM Lentiviral system?

Lentiviruses hold unique promise as gene transfer agents because they can effectively integrate into the host genome, allowing long-term high-level gene expression both in vivo and in vitro. Unlike traditionally used retroviruses, lentiviruses are imported much more actively into the nuclei of non-dividing cells and stably integrated into the host cells’ genome independent of cell cycle. Although adenoviruses are also able to transduce non-dividing cells, they are only used for transient expression because they cannot integrate into the host cells’ genome.

Is it safe to use Lentivirus (Lentiviral Particles)?

After many years of research and application, the Lentiviral system is accepted as a very safe vector system for gene expression analysis. Biosafety was a major consideration during development of GenTarget’s system, and a number of features have been included to enhance the biosafety of GenTarget’s lentiviral vectors:

Biological lentivirus titer is commonly determined by transducing HT-1080 cells (or other cell lines) and counting the stable clones after selection by antibiotics, a process that typically takes two weeks or more. Alternatively, two common methods have been applied for faster titer measurement: (1) Measure the lentiviral protein expression levels using an ELISA kit (e.g. p24 ELISA), or by qPCR; and (2) Measure fluorescent protein expression levels as a reflection of viral titer.  P24 measurement does not represent the real number of functional particles in the lentivirus, and often misrepresents the real transducing unit titer because “nonfunctional particles” or protein debris can contribute to the measured protein level. The relationship between the amount of p24 (in ng) and the transducing units (in TU) varies among lentivectors and must be determined empirically. Measuring the fluorescence-positive cells is a much easier and more direct method; however, it relies on the lentiviral structure. If the target gene and fluorescent protein are under different promoters, fluorescence cannot exactly reflect the virus titers due to efficiency differences among different promoters. To obtain a better correlation between virus titer and fluorescence expression, both target and fluorescent protein must be under the same promoter. The conventional method for expression of two proteins under the same promoter is to use IRES (Internal Ribosomal Entry Sites) for bicistronic expression. IRES, however, expresses the second gene at substantially lower levels than the first gene, leading to an inexact representation of virus titer.

To develop a reliable, easy, real-time monitoring method for lentiviral titers, GenTarget constructed a novel lentiviral vector in which the target is linked to a fluorescent reference protein (GFP or RFP) by the 2A self-processing peptide derived from the foot-and-mouth disease virus. The target and fluorescent proteins are mainly expressed as two separated proteins under the same promoter from a single reading frame. The 2A sequence is a short self-cleavage signal that cleaves at its own C-terminus between the last two amino acids in an enzyme-independent manner (probably by ribosomal skipping during translation), thereby producing equal molar expression of the target and reference fluorescent proteins.  Consequently, lentiviral titers can be readily measured as fluorescence in real-time. Because lentiviral titers decrease dramatically when the vector size reaches the lentiviral packing limitation, the vector’s small size means lentiviral titer is not compromised. To further enhance the florescence signal, the florescent reference protein was fully codon optimized.

To ensure the target protein is expressed separately from the fluorescent protein, a furin cleavage site was placed between target and the short 2A peptide. Once the lentivector is transfected, the host cells’ endogenous furin enzyme will remove the C-terminal 2A peptide so that the target will be expressed as native protein or only with a C-terminal His-tag, as desired.

To get the highest target protein expression, GenTarget developed its proprietary CMV promoter (suCMV), which demonstrates the strongest efficiency of any promoter in mammalian 293 cells. To generate optional inducible expression targets, GenTarget’s inducible CMV promoter was modified to include two copies of the tetracycline repressor (TetR) binding sequence. This modification does not change the CMV promoter’s constitutive expression; however, when the repressor, TetR, is present the promoter is repressed, and expression is induced only when tetracycline is added. Therefore, it is an optional inducible system (click to see more details).

Is it safe to use GenTarget’s Lentiviral system?

GenTarget SureTiterTM lentiviral vector system includes all of the biosafety features mentioned above. It is a third generation lentiviral system incorporating a 3′-LTR self-inactivation mechanism, and it will only generate replication-incompetent lentivirus.

What are pre-made lentiviral particles or lentivirus?

Lentiviral particles are lentivirus supernatant (containing specific genes or RNAi vectors) generated from lentiviral vectors (LVs). After addition into mammalian cell culture, they deliver genes into the cells with high efficiency and stability. Utilizing its proprietary SureTiterTM Lentiviral vector system, GenTarget generates different kinds of pre-packed lentiviral supernatant, called Lentiviral Particles. Each Lentiviral Particle contains a fully sequence verified target, ready for transduction into the any mammalian cell. They are easy and safe to use, simply applied 50 µl into your cultured cells and you will be able to confirm the specific target’s expression under a fluorescence microscope after 48-72 hours. 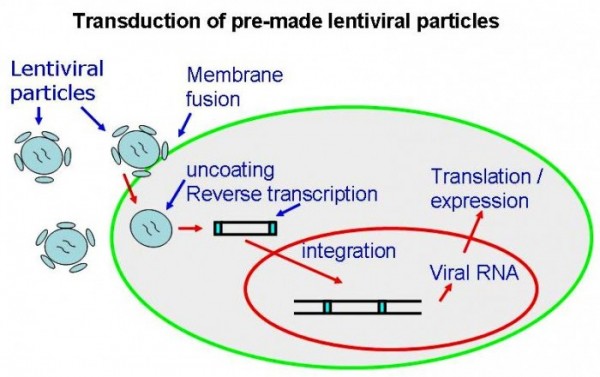 High titer lentiviral particles / supernatant were produced in 293T packaging cells in DMEM with 10% heat-inactivated FBS (Note: virus is also provided in PBS after purification and concentration). They are pseudotyped with VSV-G glycoprotein, and are able to transduce any cells, including primary and non-dividing cells. Each lentiviral particle is provided in a frozen tube containing 200 µl at >107 IFU/per ml. For more details, see FAQ for lentiviral particles.

The main applications for pre-made lentiviral particles are: